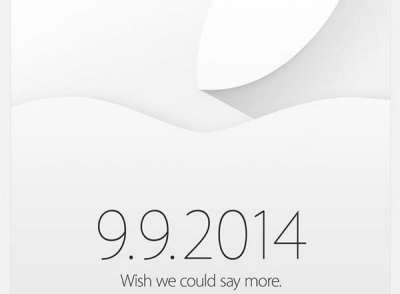 The tech industry expects that Apple’s next iPhone with a larger screen will be unveiled in two weeks. The company confirmed the date of its highly anticipated iPhone 6 launch event by sending out invitations featuring a close-up image of the top of the Apple logo saying “Wish we could say more”.

The event will take place in the Flint Centre in Cupertino. The company is expected to reveal a new larger smartphone at the event, with a 4.7in screen. The new device is expected to compete with larger phones manufactured by Apple’s rivals Samsung, LG, HTC, Sony and even Microsoft. The rumors are that the company will also announce the launch of another new iPhone with a larger 5.5in screen and wearable.In addition, the industry expects that the new Apple’s smartphone will have a harder, more scratch-resistant sapphire screen. However, the recent indications from the supply chain suggest that the tech giant may struggle to meet demand for the new screen.Traditionally, the fall event will also mark the launch of the new iPhone and iPad software, iOS 8. The updated system will include lots of new features focused around flexibility and interaction with Apple’s desktop and laptop machines.Finally, the company’s new Health application is supposed to capitalize on the increasingly popular “quantified self”, collecting information from various fitness trackers and medical devices into a single application. In this connection, many industry observers expect iPhone 6 to also include expanded fitness tracking and health monitoring capabilities.In the meantime, the market researches suggest that the iPhone 6 may become the biggest launch in Apple’s history. The matter is that the current demand for the new larger smartphone is expected to be extremely high, with iPhone users upgrading to the larger form factor popularized by Android and Windows Phones.iPhone is what most of Apple customers are waiting for, but the tech giant is also expected to launch a smartwatch later in 2014. This device is expected to compete with the new raft of Google smartwatches from LG, Samsung, Motorola and others. However, it is unknown for sure whether Apple is going to reveal it during the September event.