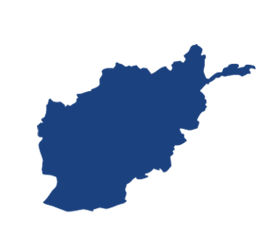 Afghanistan, (which literally means Land of the Afghan) is a mountainous land-locked country located in Central Asia. It has a history and culture that goes back over 5000 years. Throughout its long, splendid, and someti

mes chaotic history, this area of the world has been known by various names. In ancient times, its inhabitants called the land Aryana. In the medieval era, it was called Khorasan, and in modern times, its people have decided to call it Afghanistan. The exact population of Afghanistan is unknown, however, it is estimated to be somewhere close to 32 million.

Afghanistan is a heterogeneous nation, in which there are four major ethnic groups: Pashtoons, Tajiks, Hazaras, and Uzbeks. Numerous other minor ethnic groups (Nuristanis, Baluchis, Turkmens, etc.) also call Afghanistan their home. While the majority of Afghans (99%) belong to the Islamic faith, there are also small pockets of Sikhs, Hindus and even some Jews. The official languages of the country are Pashto and Dari (Afghan Persian aka Farsi). The capital of Afghanistan is Kabul, which throughout history, was admired by many great figures, such as the great Central Asian conqueror, Zahirudeen Babur. Unfortunately, due to many years of war, this great city has been shattered and nearly destroyed.

Today, Afghanistan is on a road to recovery, however, after decades of war, the economy is still in ruins, and its environment is in a state of crises (by darryl). After pushing the date back twice, Afghanistan’s presidential elections were finally held on October 9, 2004. Over 8 million Afghans voted in the elections. The Joint Electoral Management Body of Afghanistan certified the elections on November 3rd, and declared Hamid Karzai, the interim President, the winner with 55.4% of the votes. Karzai’s strongest challenger, Yunis Qanooni, came in second with 16.3% of the votes.

With help from the United States and the United Nations, Afghanistan adopted its new constitution, establishing the country as an Islamic Republic, in early January 2004. According to the constitution, the Afghan government consists of a powerful and popularly elected President, two Vice Presidents, and a National Assembly consisting of two Houses: the House of People (Wolesi Jirga), and the House of Elders (Meshrano Jirga). There is also an independent Judiciary branch consisting of the Supreme Court (Stera Mahkama), High Courts and Appeal Courts. The President appoints the members of the Supreme Court with the approval of the Wolesi Jirga. Assembly elections were held in late 2005.

For a detailed statistical look at Afghanistan check out the following link: