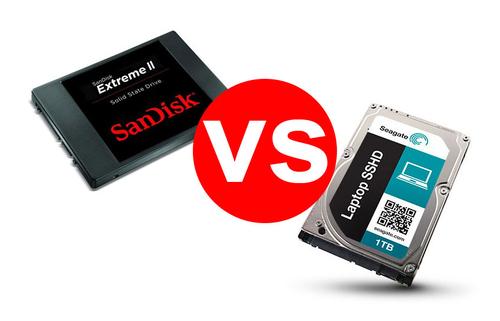 When it comes to performance, nothing beats a laptop storage drive upgrade. But, choosing a drive isn’t as simple as it once was. Today, there are three basic options to select from including SSD, SSHD, and HDD. What’s the difference? Here’s a comparison guide of all three types.

SSDs are considered the most durable drive type. Because these drives are solid state, they do not have any moving parts. The absence of moving parts means that you can drop, shake, and put SSDs to temperature tests without damaging the drive (within reasonable limits).

SSD designs are also the thinnest and lightest, making these drives great for lighter PCs. When it comes to multitasking, SSDs are also the best performing drives available, though they are not cheap. High capacity SSD options are often out of reach monetarily, which is why lower capacity drives are often chosen.

Without argument, HDD drives can store more data and outperform SSD or SSHD drives. Typically, HDD drives are available in 7mm and 9.5mm formats, which makes them bigger than a SDD drive. HDDs do provide good performance marks for most PCs on the market, though they do have moving parts, and this makes the HDD option less durable than a SSD choice.

If you combined a SSD with a HDD drive, the outcome would be a SSHD drive. Literally, ‘SSHD’ stands for ‘Solid State Hybrid Drive,’ and that’s just what it happens to be. This hybrid drive combines both moveable and immovable parts, so it’s sturdier than a HDD drive and slightly less sturdy than a SSD drive – but much more affordable.

SSHD drives will ramp up your system’s performance (depending on which one you choose), and you will notice a difference where things like restart, sleep, and overall speed go. Next to SSD drives, SSHD drives are the most power-efficient option, so this is also something to keep in mind.

When it comes to failure rates, all three drive types easily compare. Lately, many people prefer the SSHD option, though, because it does combine the best of both worlds (uses both HDD and SSD features, separately). In most cases, the thing to think about when choosing a drive type is cost-effectiveness.

You want to get as much “bang for your buck” as you can when buying a drive because drives aren’t cheap. In this reviewer’s opinion, the SSHD option is the best choice, since it is the most cost-effective option; combines both HDD and SSD options; and is slim enough to fit into your shirt pocket.

Right now, Seagate and Toshiba both offer SSHD options that are affordable and perform well. When choosing between the two, Seagate’s SSHD choices are more affordable, though they offer performance levels that are nearly the same as what Toshiba has come up with. There are other options on the market, though these two companies provide the best SSHD choices at the time of this writing. Questions? Comments? Just ask.