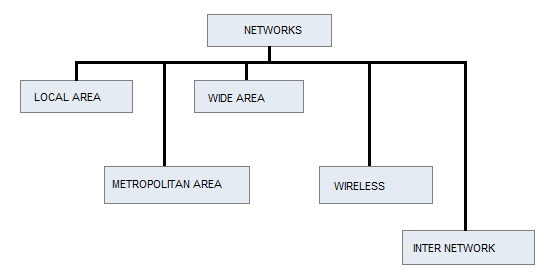 It is also called LAN and designed for small physical areas such as an office, group of buildings or a factory. LANs are used widely as it is easy to design and to troubleshoot. Personal computers and workstations are connected to each other through LANs. We can use different types of topologies through LAN, these are Star, Ring, Bus, Tree etc.

LAN can be a simple network like connecting two computers, to share files and network among each other while it can also be as complex as interconnecting an entire building.

It is basically a bigger version of LAN. It is also called MAN and uses the similar technology as LAN. It is designed to extend over the entire city. It can be means to connecting a number of LANs into a larger network or it can be a single cable. It is mainly hold and operated by single private company or a public company.

It is also called WAN. WAN can be private or it can be public leased network. It is used for the network that covers large distance such as cover states of a country. It is not easy to design and maintain. Communication medium used by WAN are PSTN or Satellite links. WAN operates on low data rates.

It is the fastest growing segment of computer. They are becoming very important in our daily life because wind connections are not possible in cars or aeroplane. We can access Internet at any place avoiding wire related troubles.. These can be used also when the telephone systems gets destroyed due to some calamity/disaster. WANs are really important now-a-days.