Why Are Men So Difficult? The 8 Big Differences Between Men’s and Women’s Brains 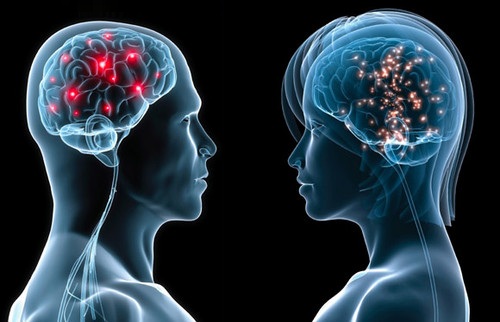 Many women find it incredibly difficult to understand men. What you ladies need to understand is that we are totally different, and instead of giving up, all of us should try to embrace the differences and accept each other for who we really are. Only then, we can use all of this knowledge to our advantage. The following article illustrates the differences between the sexes and explains how you can use these differences to your advantage.

Modern science has allowed us to study the male and female brains and come up with conclusions as to why we are so different. This is mainly down to how our brains are structured, and that’s what this article is about. It will not teach you how to make him fall in love with you but it will show you why we are so different and as soon as you understand these differences and accept them as reality, it will become much more easier to relate to men.

Human Relationships: Women communicate much better than men, they focus on how to create a solution that works for the entire group, talking through issues, and utilizes non-verbal cues such as tone, emotion and empathy. Men on the other hand, tend to be more task oriented, less talkative and more isolated. Men have a hard time understanding emotions that are not spoken, while women tend to intuit emotions and emotional cues. These differences clearly explain why men and women sometimes have difficulty in communication and why men-to-men friendships look different from friendships among women.

What does this mean? If you ever had a conversation with a man and got deep into a subject but yet felt like you spoke a completely different language well, this is to blame. In your first steps to understanding men this is the first thing you need to comprehend, MEN ARE DIFFERENT. They are so different in fact that sometimes we can’t even communicate but, if you can try to lower yourself to our level of communication, which means vocalizing the majority of your emotions, you’ll have a much better chance at properly communicating with a man.

Now, I’m not telling you to vocalize absolutely everything that you’re feeling but when a man asks you if something is wrong and you say “Nothing” you need to understand that unless you actually TELL HIM what’s wrong, he won’t have the slightest clue. Sure, you’re best friends get you and maybe even your husband if you’ve been together for years but, the average guy or even your 2 year long boyfriend won’t. Lowering yourself down to our more simple way of communicating will only make life easier for all of us.

Left brain vs both hemispheres: Experts have proven that men process better in the left hemisphere while women tend to process equally well between the two hemispheres. This difference clearly shows why men are stronger with left-brain activities and approach problem solving from a task-oriented perspective while women typically solve problems more creatively and are more aware of feelings while communicating.

What does this mean? This task oriented approach means men think in the following manner when trying to solve a problem:  “In order to solve this problem I will need to get this done first, then this other thing, then this and then they all fit into place and get this done”. Multitasking? There’s no such thing as multitasking when it comes to men…This also explains why men get angry when you are multitasking (e.g talking to them and doing something else) because they simply can’t understand what you’re doing. This is another prime example that will get you closer to accepting just how different men are and proves why men are better in some jobs (programming, business) and women in others (teaching, caretaking).

Mathematical Abilities: An area in the brain called the inferior-parietal lobule (IPL) is typically significantly larger in men, especially on the left side, than in women. This is the section responsible with mathematical ability, and probably explains why men perform higher in mathematical tasks than do women. What’s even more interesting is that this area of the brain that was abnormally large in Einstein. The IPL also processes sensory information, and the larger right side in women allows them to focus on, “specific stimuli, such as baby crying in the night”.

Reaction to stress: In stress situation men have a response reaction that resembles “fight or flight” while women react with a “tend and befriend” strategy. Psychologist Shelly E. Taylor first came up with the phrase “tend an befriend” after noticing that during times of stress women tend to take care of themselves and their children (tending) and form strong group bonds (befriending). The reason behind these different reactions to stress is down to hormones. When someone is under stress the hormone oxytocin is released into the body. In men, testosterone reduces the effects of oxytocin as it is produced in high volumes during stress; this explains the reason for the “fight or flight” response. In women, estrogen amplifies the effects of oxytocin resulting in calming and nurturing feelings.

Language: The two sections in the brain which are responsible for language have been found to be significantly larger in women than in men, indicating one reason why women typically excel in language-based subjects and in language-associated thinking. It’s also important to mention that men typically process language in one hemisphere whilst women process it in both. This differences offers a bit of protection in case of a stroke, as women may be able to recover fully from a stroke affecting the language areas in the brain while men may not have this same advantage.

Emotions: The most obvious difference is probably the emotions. Women have a larger deep limbic system than men, it allows them o be more in touch with their feelings and better able to express themselves, which promotes bonding with others. This is one of the reasons why women serve as caregivers for children. Sadly this comes with a downside as this larger deep limbic system also opens women up to depression, especially during times of hormonal shifts such as after childbirth or during a woman’s menstrual cycle.

What does this mean? Again, as I’ve mentioned above, women are much better at communicating than men so, if you want to be understood by a man you need to lower yourself to his level of communication. Vocalize what you are feeling and he will have a much easier time in understanding you. Don’t give up saying, “ah men don’t understand me”, try to make them understand and you will see that your love life success will greatly improve.

Also, it’s worth mentioning that some men understand these differences themselves and will, in turn, try to take advantage of your emotional brain by making you feel good all of the time. Sure, this may sound great, but in reality many of the men that understand this concept, often use it for their own benefit (I know because I used to do it…). However, it’s also important to note that many of these men live to please and if you can “keep” them you’re on the right track for a lifetime of happiness.

*We’ll look into the types of men and how to keep them, in the newsletter.*

Pain: Men and women perceive pain differently. Studies have shown that women need more morphine to reach the same level of pain reduction. They have also shown that woman vocalize their pain and seek treatment much quicker than men. During pain, an area of the brain called the amygdala is activated. Research has shown that in men the right amygdala (controls external functions) is activated and in women the left amygdala (controls internal functions) is activated. This is the reason women seem to perceive pain more intensely than men, although they can withstand higher levels of pain (childbirth).

So what can we draw from this article? Most importantly the fact that men and women are completely different. This is actually funny when you think about it because we can’t live without each other. Couples are essentially a better human being. Because both the male and female perspectives are shared regarding any life situation, life as a couple should be genuinely easier than single life.

What can you do with this sort of information? Men love women that they can connect to, although we may never reach the same level of communication, by vocalizing your emotions more often you’ll have a higher chance of connecting with a man.

Also, by understanding what this article tried to explain (that we are incredibly different) you can change your perception on men and instead getting upset and saying “You don’t understand me!”…you can laugh inside and think to yourself, “Haha, you don’t have the ability to understand me, you primitive creature”.

If you want to get the full scoop behind the male mind and go way beyond what this article is teaching, I urge you to consider having a look at Mike Fiore’s presentation… it will blow you away! Click here to watch the video