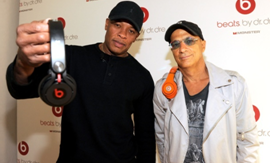 The tech giant is going to integrate its Beats Music subscription service into iOS software next year. Media reports claim that Beats will become part of iOS in March 2015, forcing Apple’s iTunes music buyers to try the new streaming service. It is also known that the service could use the Apple Pay payments technology to charge for monthly subscriptions.

Apple bought Beats Music’s parent company Beats Electronics for $3bn earlier this year, thus acquiring its lucrative headphones business along with Beats Music, which launched in the United States early in 2014 as a rival to other streaming services like Spotify or Rhapsody.

It is expected that Beats Music will be rebranded under the iTunes moniker when it relaunches next year. Media reports say that it will be pushed to “hundreds of millions of iPhones and iPads” and launch globally, having been US-only so far.

Last month, Apple admitted that sales of music downloads on its iTunes store were declining. In the meantime, the development of Spotify, which has over 50 million active users, 25% of which are paying for subscription, has sparked rumors that Apple is going to compete in 2015 and beyond.

Apparently, pushing a rival app to every iPhone and iPad will encourage more people to try it. At the same time, the company seems to be pressing labels for licensing deals that will help it start a price war with competitors. The suggestions are that Apple’s plans for Beats Music go beyond simply rebranding the service and pushing it to iOS devices, as Beats Music’s chief creative officer recently hinted that he was working on new features for the service.

Integrating Apple’s streaming subscription service on every iOS device will likely be less a case of pushing an unwanted app to devices in similar vein to U2’s album iTunes giveaway, and more about incorporating Beats Music into the Music app that is already part of the Apple software.

Taking into account that Spotify remains the biggest streaming subscription music service, Apple may train its sights on Google, which has similar potential to preload its own streaming services on Android devices. It should also be mentioned that there are even more of Android devices out in the wild than iOS devices at the moment.

As usual, Apple hasn’t officially confirmed these plans yet.