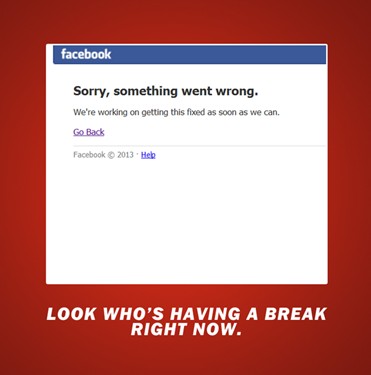 The social network was unavailable worldwide for 31 minutes, and users turned to other platforms – most of them did so to ask what’s going on or to complain. This was the longest outage on the website for 4 years. Users couldn’t access both the website and Facebook smartphone and tablet apps, and they decamped to other social media platforms to complain.

Facebook collapsed on Tuesday morning, showing visitors the error message saying: “Sorry, something went wrong. We’re working on getting this fixed as soon as we can”. You could be watching these lines for 31 minutes, until the website and apps were back to normal.

The company explained that they experienced a problem preventing people from posting to Facebook for a brief period of time. The specialists said they had resolved the issue quickly, and were back to 100% in half an hour. The company apologized for any inconvenience that may have caused in an official statement. However, it is unknown what caused the outage.

In the meantime, publishers saw referral traffic from the network fall off a cliff as the outage hit. However, people didn’t just shut down their browsers and get off their machines. Instead, they turned to other social networks to trawl for information on what had happened to Facebook. Twitter, for example, saw a huge increase in traffic. Some users even went to Google+.

The last time Facebook was down for any length of time was four years ago, when an error in error checking software took offline the main database for two and a half hours. At the time, it was also the worst outage for the period of over 4 years, and Facebook explained in the official statement that the problem at the time was caused by “an unfortunate handling of an error condition”. It turned out that an automated system for verifying configuration values somehow caused much more damage than it fixed.